Wiikipedia
Register
Don't have an account?
Sign In
Advertisement
in: Articles under construction, Sports, Wii Sports (series),
and 5 more

Boxing is the fifth sport in Wii Sports, which also appears in its remake, Wii Sports Club. In the game, players use boxing gloves (controlled with the Wii Remote and Nunchuk to hit the other player.

In Wii Sports, boxing is a simple game that involves one or two players fight versus the each other. There are three rounds maximum, but the game will end if a player gets knocked out. A round lasts for three minutes but can speed up sometimes. To win, the player must simply knock out its opponent.

This game is the only game on Wii Sports to use the Nunchuk attachment. To control the Mii, a player basically needs to imagine that the 2 controllers are its players fists. 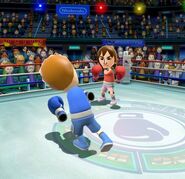 Boxing Matt, the champion of the game.