Wiikipedia
Register
Don't have an account?
Sign In
Advertisement
in: Candidates for featured articles, Quality articles, Characters,
and 7 more

View source
This article is a featured article nominee.
To see discussions, please visit the article's votes for featured page.

Miis are customizable avatars that debuted alongside the Wii via the Mii Channel. They are playable characters in several games. Later, they appeared in the Nintendo 3DS and the Wii U in their Mii Maker, as well.

They've since become a phenomenon and arguably the mascot of the Wii system console.

Miis are the principal and the only playable characters in the Wii series. In those game, all of the Miis from the player's Mii channel are playable. There are also many CPU (computer-controlled) Miis included with the games that serve as opponents and spectators.

Miis first appeared on the Wii console in the Mii Channel. Miis also appear in the Wii series, which includes Wii Sports, Wii Play, Wii Fit and Wii Music where they are the main playable characters.

The Nintendo 3DS included a Mii Maker built into it. It's almost identical to its Wii counterpart though includes the ability to take a picture of someone and there are more Mii's facial features.

It can detect nearby Wiis and download Miis from that system. However, it can't transfer them from the Nintendo 3DS to the Wii due to the new facial features the Miis now have. It is also easier to share Miis as there is a new feature to make QR codes which can be scanned. Several games for the Nintendo 3DS have made use of the Miis in the Mii Maker, including Pilotwings Resort and more.

Miis are featured prominently in Wii U's new feature "Miiverse". The Mii Character of the user will represent them on the many community forums accessible from the "Communities" menu. When posting,the user can choose an emotion for their Mii to display. The Mii Maker returns, but is now in the form of shelves your still-standing Mii Characters will stand on.

Miis make their first appearance in the Nintendo Wii's 2006 launch game, Wii Sports as the playable and background characters. Since then, the Miis will appear in every game of the series with the same role: Wii Sports Resort (2009), for the Wii and Wii Sports Club, for the Wii U (2013).

Miis appear as playable and background characters in all three games of the Wii Fit series: Wii Fit (2007), Wii Fit Plus (2009) and Wii Fit U (2013). They can be playable only in the aerobics and balance games (known as Training Plus in Wii Fit Plus).

Personal Trainer: Walking is the first video game for the Nintendo DS to feature the support of Miis, which are the main playable characters of this game.

In Mario & Sonic at the Olympic Games, Miis are playable characters, just as capable of competing as the characters from the Super Mario and Sonic the Hedgehog series. Their stats are all five out of ten. In this game, the Miis have no voices and are simply called "Mii" during events.

In Mario & Sonic at the Olympic Winter Games, Miis can be customized to wear different clothes and accessories. Unlike the last game, the stats differ depending on the gear. They can even wear different costumes of the playable characters in the game. Some of the bosses from Festival Mode also give off their costumes for Miis to wear once defeated.

Miis appear again as playable in Mario & Sonic at the London 2012 Olympic Games. As in the previous installment, players can customize their Miis with accessories and wear various costumes. These are earned when playing in the Olympic events and the London Party mode.

Just like in the three previous installment on the Wii, in Mario & Sonic at the Sochi 2014 Winter Olympic Games the player can use their Miis as characters. As with the previous three installments Miis are customizable, however this time around Miis will actually show what type their clothing makes them.

In Mario Kart Wii, Miis first appear as background characters, found in various race courses. Later in the game, Miis can be unlocked as playable characters. There are two outfits available for Miis, and both outfits must be unlocked. The first one (Outfit A), which is available when the Mii character option is unlocked, is a plain racing suit of the Mii's favorite color. The other (Outfit B), depends on the gender of the Mii. If the Mii is male, he receives a outfit of his color with blue overalls , and if the Mii is female, she receives a blouse outfit of her color.

Miis later appear as racing participants in the Nintendo 3DS title, Mario Kart 7. They can be unlocked by completing all the Grand Prix cups on any engine class. Unlike in Mario Kart Wii, however, all the Miis get the same stat boosts and are the same weight (in this case, medium), which are at around average levels, and they have different voices.

Miis appear as unlockable playable characters in Mario Kart 8. Their weight class is based on their size, just as in Mario Kart Wii, and their voices from that game return. The Miis also sport a new outfit unlike their appearances in Mario Kart Wii and Mario Kart 7 where they now wear a new racing suit with some white trimmings, a helmet with their color, and a light-colored scarf similar along with black short boots.

Miis are playable characters in the game Mario Super Sluggers. Miis cannot be chosen as team captains, but up to 8 Miis can be used. Mii stats in this game are 6/10 and chemistry with other characters is based solely on favorite color. Miis of the same color but opposite genders also have chemistry with each other. Also, they possess the quick throw ability, which allows the players to make faster throws to teammates. Hammer Bro also have chemistry with the Miis regardless of his/her favorite color.

Miis are one of the nineteen playable participants in Mario Sports Mix. They're the all-rounder (All-Around) type. Despite their height and width, they all receive the same stats: 3/5 in every stat. The color of their outfits depend on their favorite color and their clothing depends on their gender; male Miis receive a sporting outfit, while female Miis receive a skirt. Miis are also seen in the audience.

Their special ability is throwing the object into a goal which can be blocked by a struggle of the opponent. In dodgeball, the shot causes a damage radius that hits anyone inside the radius. Miis receive voices in this game.

Miis appear as playable characters from the beginning. If the player decides to start a solo profile, the he or she then has to choose a Mii for their profile. The only characters the player can use in solo mode is their Miis. The player can unlock clothes to dess up their Mii in the Dressing Room. Miis don't say anything to the other players. The color of the Mii's shop depends on the color of the Mii which is replaced by two of the Mii's opponents talking to each other; However, if one or more Miis have the same color, they will be changed, depending upon order as chosen.

Miis make their appearance in New Super Mario Bros. U as playable characters only in the Boost Rush, Challenge, and Coin Battle Modes.

Miis are also able to post comments online about a level they have played. 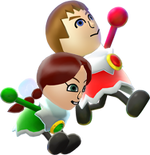 Miis return in Super Mario 3D World. Here, they serve as representatives of people who send messages and ghost data through Miiverse. The player can spot them standing around on the world map, where their messages pop up the player get close. Players can also opt to send out ghost data on completed levels, and try to beat the time records on other people's ghost data as well. The player can race up to three Miis at once, in an attempt to beat their record. In the game, the Miis appear in costumes corresponding to their favorite color, and are shown to mimic the exact movement of the person using the Mii.

Miis also have voices in the game while doing a type of move. 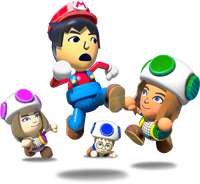 Miis are the main stars of Nintendo Land, and only playable character. In this game, each of the Miis wear a different outfit based on a character of a Nintendo franchise, in each different minigame.

Miis also appear in the Nintendo 3DS title Mario Tennis Open as playable characters. The player can dress up Miis in different costumes that can be bought in the clubhouse to give them different stats.

Miis appear in Mario Golf: World Tour, for the 3DS. The Castle Club is a game mode where players play as their Mii and compete in tournaments and various other challenges. Like in Mario Tennis Open, the player can customize their Mii with various clothing and clubs to alter their stats. In rare cases, Miis can also wear their new clothing from the Canadian Broadcasting Corporation, as Nintendo and the CBC both launched their clothing for users' Miis to wear their clothing with the red (or white) CBC gem logo on it. Strangely, their shirts says "CBC Sports" underneath the red gem logo.

Miis are playable characters in Super Smash Bros. for Nintendo 3DS / Wii U. There will be three separate classes of Miis playable: Brawlers, Swordfighters, and Gunners.

Brawlers specialize in fighting melee style, while swordfighters and gunners utilize a sword and a gun in their movesets, respectively. Each class can select 4 out of 12 special moves, equalling a total of 36 special moves.

Elisa is the Champion in Tennis.

Greg is the Server in the Table Tennis Return Challenge.

Gwen is the photographer in Skydiving and can be seen at the beginning, before the player jumps from the plane.

Lucía is the Champion of Table Tennis.

Matt is the arbitrator of Speed Slice and the Champion of Duel. He is also the champion and the players trainer in Boxing.

Miguel is the captain of the first team that the player meets in Pickup Game. He's the tour guide and owner of Miguel's Guide Plane.

Sakura is the Champion in Baseball.

Tommy is the Champion in Basketball Pickup Game.

Vincenzo gives advice by talking with a Walkie-talkie in Cycling. 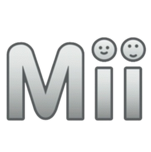