The Mysterious Ruins are a group of large, ancient buildings that were built long ago on Wuhu Island by an ancient civilization. The ruins sit on a large mesa, and it rises far above the ocean behind it.

The easiest way to get here by foot is walking up a large dirt path called the Entrance to the Mysterious Ruins.

There is a large rocky spire next to it with a large stone platform on it, called Cliffside Ruins. Archaeologist Miis have found ancient treasures in the ruins, as well as dangerous traps to scare away intruders.

A small pit with a door in its side was found, which leads down into secret tunnels and caverns inside of the island. So far no one has been brave enough to explore it. The Serpent's Mouth lies at the bottom of the cliff facing the ocean, and Sea Serpent Cavern is connected the secret tunnels to the main Ruins. 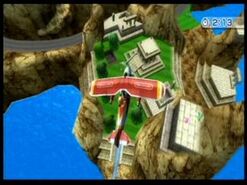 The ruins as seen from above. 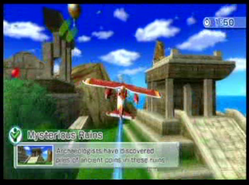 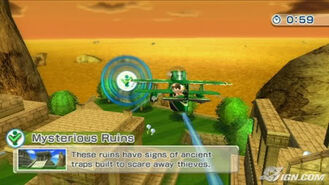 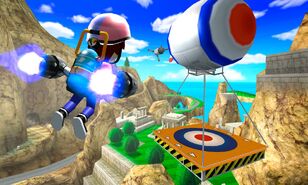 A Mii is reaching a Floating Platform from Pilotwings Resort, suspended over the ruins. 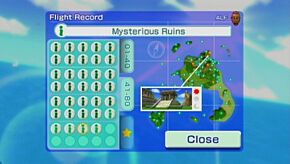