Pilotwings Resort is a flight simulation video game for the Nintendo 3DS, developed by Monster Games and published by Nintendo. It is a sequel to the 1990 Super Nintendo Entertainment System game Pilotwings and the 1996 Nintendo 64 game Pilotwings 64.

Even though Pilotwings Resort isn't a Wii Sports series or a Wii series game, it has many similarities with the Island Flyover mode of Wii Sports Resort.

Nintendo announced in November 2012 that the game will be re-released, along with some of their earlier, published games for the Nintendo 3DS, as a downloadable title via Nintendo eShop.

Wuhu Archipelago is the main location of the game.

Pilotwings Resort contains two modes of play. The first is "Free Flight Mode" (similar to the Wii Sports Resort minigame, Island Flyover), that allows the player to freely explore Wuhu Island using any type of aircraft they have unlocked.

Various collectibles such as balloons and iPoints can be picked up to unlock certain features in the game, like diorama statues and the player's very own castle on the archipelago's Private Island.

In this mode, there is a time limit which is extended for the next playthrough when the player has collected a set number of balloons.

The second mode is called "Mission Mode", which requires the player to complete a series of objectives within certain parameters. These increasingly difficult missions span Training, Bronze, Silver, Gold, Platinum and Diamond ranks (the latter only being unlocked after achieving a three star rank on every previous mission).

The player is graded between one and three stars on their performance in each mission. When players achieve higher star rankings, they grow closer to unlocking several in-game bonuses, including a "Meca Hawk" robot from Pilotwings 64 that walks around Wedge Island and alternate credits.

The basic aircraft are Plane, Rocket Belt, and Hang Glider. As players progress through Mission Mode, they unlock the "Super Vehicles," consisting of the Turbo Jet, Super Rocket Belt, and Pedal Glider. Each holds its advantages, like the turbo jet being able to fly at high speeds, but each is more difficult to control.

The Super Vehicles are all featured in their own finales in the Diamond rank missions. A Flying Squirrel suit is also available in the game, but it is not an unlockable vehicle and only appears in one mission as a kind of "power-up" for the Rocket Belt

The game's first review, from Eurogamer, was generally positive. It received an 8/10, stating "...Pilotwings ultimately hits an enjoyable sweet spot. It's intricate enough to encourage mastery, and roomy enough to tempt you back after the main event, while the skillfully simple presentation makes it perfect for demonstrating your latest gadget's 3D capabilities." Official Nintendo Magazine's review was also relatively positive. They gave it 81%, saying "Pilotwings Resort is a lovely game, with its beautiful 3D vistas and responsive, satisfying controls. We only wish there was more of it." Their verdict was, "While this looks and feels amazing, there just isn't quite enough." IGN gave the game a 7/10, criticizing the lack of multiplayer, but also noting that "there is a definitely benefit in using 3D."[1] GameSpot scored it a 6.5/10. They praised the game for intuitive controls, enjoyable missions, and pleasing visuals, but the game was too short, didn't have enough content, and no high score sharing.[2]

Pilotwings Resort sold an initial 26,554 units in Japan during its debut week, making it the best-selling 3DS game and the sixth-best selling game overall for that week.[3] However, sales quickly tapered off, with the game having sold just 57,846 copies in the region by its fifth week.[4] 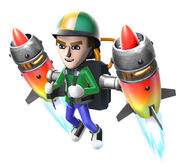 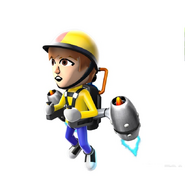