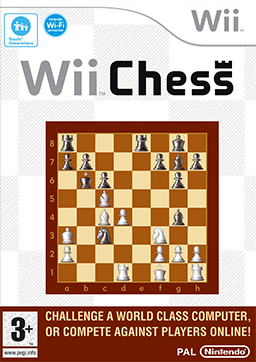 Wii Chess is a downloadable video game for the Wii. It was developed by Nintendo and was released on January 18, 2008 in Europe as a budget-priced retail title. It was released as a downloadable WiiWare title in Japan on September 30, 2008. No release in North America or Australia has been announced, making it the only game in the Wii series that was not released in these countries. Wii Chess is a game of the Nintendo's brand, Touch! Generations.

The game is played using the Wii Remote. However, instead of the pointer function, chess pieces are moved across the board using the D-pad on the controller.

The game features an option that gives players new to chess instructions on how each piece should move across the board. Players are also able to record and replay their games at a later time. Players can also play online against other players courtesy of the Nintendo Wi-Fi Connection, with Wii Chess players being able to compete against players of World Chess and vice-versa.