Wiikipedia
Register
Don't have an account?
Sign In
Advertisement
in: Articles under construction, Nintendo, Wii Fit (series),
and 3 more 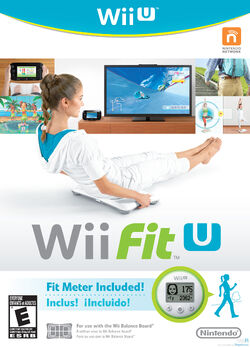 Wii Fit U is an exercise video game developed by Nintendo for the Wii U console, and is the successor to the Wii games Wii Fit and Wii Fit Plus, being the third game in the series. Wii Fit U utilizes both the Wii Balance Board and the Wii U GamePad in gameplay, and will be bundled with the newly introduced Fit Meter, an activity meter accessory.

Although originally slated for release during the Wii U launch window, Nintendo announced at E3 2013 that the game would be delayed until December 2013, so that additional new features could be implemented.[1] However, on August 7, 2013, Satoru Iwata announced via the Japanese edition of Nintendo Direct that the game's Japanese release date is confirmed as October 31, 2013.[2]

Like its predecessors Wii Fit and Wii Fit Plus, Wii Fit U focuses on engaging the player in physical activities, including yoga and strength training, through use of the Wii Balance Board, a platform peripheral upon which the player stands during play that measures both the player's weight and center of balance. Wii Fit U introduces activities that incorporate the Wii U GamePad into their gameplay, as well as activities that were featured in the previous games. Existing Wii Fit and Wii Fit Plus owners can transfer all their save data and records into Wii Fit U.

Wii Fit U is designed to be played with or without use of a television screen; the player can choose to view all action entirely on the Wii U GamePad touchscreen. All retail copies of Wii Fit U are bundled with an activity meter, called the Fit Meter, which is carried while jogging or otherwise moving about the day. When the Fit Meter is placed near the Wii U GamePad, its data will be automatically uploaded via Infrared and saved to the Wii U. The Fit Meter is also sold separately.

A promotional free digital version of the full game is available via the Nintendo eShop for a period of time in North America and Europe starting from November 1, 2013 until January 31, 2014, in which after this period it will be replaced with a regular, purchasable version of the game. The free version is playable for one month starting from the date it is first launched. The Fit Meter is separately available for purchase simultaneously as the free digital version. If the Fit Meter hardware has been registered with a copy of the free digital version, that copy will void its time limit, making the application permanently usable. Retail copies of the game, including standard and Wii Balance Board bundles, both which include Fit Meters, will be available later in December 2013 outside Japan.