The Wii Mini is a smaller (hence the title) redesign of the Wii which lacks YPBPR (component video/d-terminal) and s-video output, GameCube compatibility, online gaming, the SD Card slot and Wi-Fi support, and has only one USB port unlike the previous two models. It was released in late 2012 and early 2013.

Nintendo uses this console and the Nintendo Selects game series to promote low cost gaming. The Wii Mini is styled in matte black with a red border, and includes a red Wii Remote Plus and Nunchuk but does not include a pack-in game. A composite video/audio cable, wired Sensor Bar and power adapter are also included. 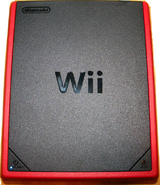 A top view of the Wii Mini.

The Wii Mini's box.
Community content is available under CC-BY-SA unless otherwise noted.