Wiikipedia
Register
Don't have an account?
Sign In
Advertisement
in: Articles under construction, Wii (series), Nintendo,
and 3 more 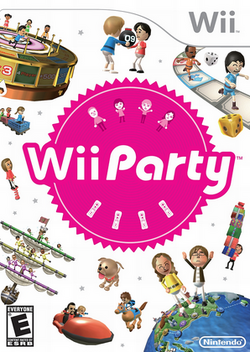 Wii Party is a party video game developed and published by Nintendo for the Wii. It has met with mixed to positive reviews from critics and sold 7.94 million copies worldwide as of March 2012.[1]A sequel, Wii Party U, was released for the Wii U on October 25, 2013.

Most of the game modes integrate use of Wii Party's 80 mini-games. The game also offers additional modes that make exclusive use of the mini-games. Party Games are games in which four players compete against one another. In all party games except Spin off and Bingo if the minigame ends in a tie, the player would roll a dice to see who gets the highest number.

Wii Party received mixed to positive reception, with an average Metacritic score of 68/100. GameSpot awarded Wii Party a score of 8 out of 10, praising the wide variety of games and modes. GameSpot also added that the game's multiplayer "is a blast," and believes that Wii Party is "faster and better" than Mario Party.[2] Nintendo World Report also gave the game an 8/10, citing that "A common complaint about Mario Party is that it has too many things that slow gameplay down to a near halt, such as multiple traps on one game board and waiting for the player to finish his or her turn. Wii Party avoids this by speeding up gameplay".[3] IGN gave the game a 7/10, criticizing the graphics saying, despite being bright and colorful, that they are "not exactly pretty", but praised Nintendo for doing a good job to allow players to follow instructions to get through objectives.[4] GameTrailers gave the game a 7.9, saying "Aside from a few dud modes and some minor control issues, there isn't a whole lot to fault."[5]