View source
This article is a featured article nominee.
To see discussions, please visit the article's votes for featured page. 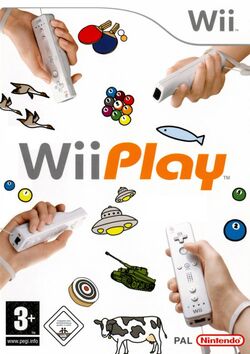 Wii Play is a party video game developed and published by Nintendo for the Wii. It was released as a launch game for the console in Japan, Europe, and Australia, and was released in North America on February 12, 2007. The sequel to Wii Play, Wii Play: Motion, was released in 2011. Wii Play is part of both Nintendo's Touch! Generations brand and the Wii series.

Wii Play features nine minigames that are designed to introduce players to handling the Wii Remote controller. Like all other titles in the Wii series, the players control Miis.

A beta version of the game was first playable alongside Wii Sports at E3 2006. However, the games were not put together in a pack-in; they were separate games meant to be tech demos. A notable example was Shooting, which was also a demo on the Nintendo Fusion Tour, which spectators thought was a full-fledged Duck Hunt sequel.[1] Nintendo had yet to announce that the tech demos would be compiled together into a full game.

The game was revealed together for the first time on the Nintendo World event in New York on September 14, 2006. It is here where Mii Channel functionality was confirmed to be included in the game. Also included updated versions of the games playable at E3, now closer to their finalized form.[2]

Wii Play consists of nine games, designed for 1 or 2 players, in the 1-player mode, the player will play versus/with a computer-controlled second player in games where it is necessary.

No Nunchuks are required for any of the games; however, players can use a Nunchuk as a substitute for the D-Pad for the "Tanks!" minigame if they wish.

After playing each game another game is unlocked, until all nine games are available. In single player, points are earned in each game and the top 5 highest scores are stored. Getting high enough scores in single player awards the player bronze, silver, gold and platinum medals for that game. It also puts a message on the Wii Message Board saying which game and medal were unlocked, and gives a short tip for that game.

Wii Play received mixed reviews from critics. It received a score of 61.64% on GameRankings and 58/100 on Metacritic. The reviewers at Electronic Gaming Monthly gave the game varying scores of 6.0, 4.5 and 5.0, stating that while "anybody can play it, including grandma,... you'll probably be bored in minutes". gamesTM gave the game a more scathing reaction, scoring it 3/10 stating that "Even the games that do work break down due to a combination of being extremely bland or too repetitive", and even that the strongest game, Shooting, "loses its charm as soon as you realise the targets follow a similar path every time you play". IGN Australia were more positive in their reaction, awarding the game 8.3/10, saying that it was "effectively being sold at $10 on top of the cost of a Wii Remote" and that "as a training game, it succeeds completely".[3]. The Official Nintendo Magazine also praised the game and gave it 91%, describing the games as "surprisingly addictive" as well as citing the value of supplying an additional Wii Remote.