Wii Sports Resort was first announced at E3 2008 and was released in Japan on June 25, 2009 and in nearly all other regions in the following month. While the game was originally released only as a stand-alone title, as of 2009 the game is bundled with newer Wii consoles, along with Wii Sports.

Wii Sports Resort is a simple collection of twelve sports games, which includes two enhanced games from Wii Sports along with ten completely new selections, designed to take advantage of the motion sensing capabilities of the Wii Remote and Nunchuk. Like Wii Sports, players mimic the actions performed in real life sports, but are controlled with greater accuracy due to the precision capabilities of the Wii MotionPlus accessory in order to provide a more immersive experience.

Wii Sports Resort is a sports game set in a beach resort on an island of an archipelago called Wuhu Island. The first time a player starts the game, several instructional videos will play, then the strap usage screen and the Wii MotionPlus test, and finally, the player will skydive to Wuhu Island.

Twelve different sports are available to play; like the original, the sports are each played by holding the Wii Remote (and in some cases, the Nunchuk) in a manner similar to the actual sport being replicated. For example,

in archery, the player holds the Wii Remote vertically to hold the bow, and pulls back the Nunchuk to pull back the bow's string.

The new feature that Wii Sports Resort brings is Wii MotionPlus compatibility, which enables 1:1 control and allows the games to be played with greater accuracy.

For example, the game's new variation, table tennis, gives the player greater control over adding spin to the ball by twisting the Wii Remote while swinging. Most sports with up to three or four players will allow one Wii Remote to be shared among players while taking turns. The only sports in this game returning from the original Wii Sports  are Bowling and Golf.

The game features twelve sports, of which two (Bowling and Golf) are returning from Wii Sports. Each sport has one, two or three minigames. 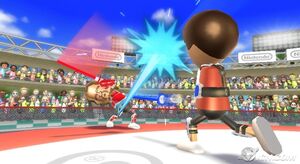 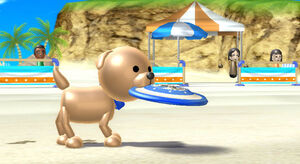 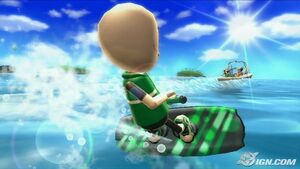 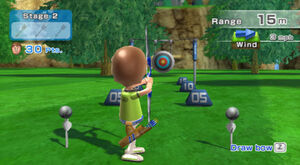 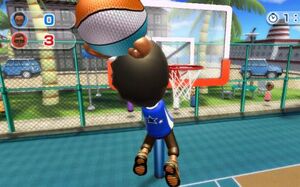 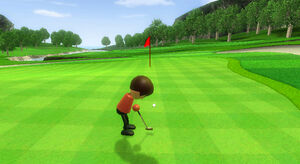 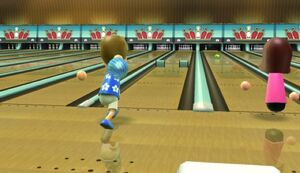 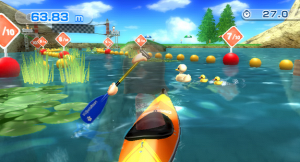 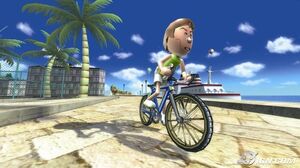 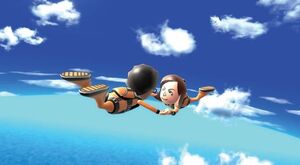 The idea for a sequel to Wii Sports  was considered well before the advent of the Wii MotionPlus peripheral, but development only moved forward when the new possibilities in control were realized.[1] The game was first revealed at Nintendo's 2008 E3 presentation.[2]

Fishing and a water slide were considered for inclusion in the game. A prototype kendama minigame was also created, but did not fit into the resort theme.[3] Wuhu Island originally appeared in Wii Fit , and was slightly modified to fit the profile of a resort island. Hotels, sport arenas (bowling alley, tennis courts, and sword play arena), a castle, ruins of an older civilization, and some new rock formations were added.

Wii Sports Resort has received generally favorable reviews, with an average score on Metacritic of 80%. IGN gave it a 7.7 out of 10,[4] citing the impressive fidelity of the controls and how the graphics, as compared to the majority of Wii games, were superb. GameTrailers gave an 8.6 out of 10.  GameSpot gave it an 8.0 out of 10. Edge (magazine) magazine gave it a 6 out of 10.[5] On 1UP.com, the average score between the editors reviews and users was an 'A-'.[6] GamesRelay gave the game a score of 8.2,[7] citing it to be a fun loving game for family and friends. SPOnG.com's Tim Smith awarded the game 90%,[8] calling Wii Sports Resort and the MotionPlus peripheral "simple but welcome additions to the Wii's line-up". X-Play stated that "You'll have a good time playing solo, but the real fun begins when more people join in on the action" and that it applies to all the events.