Wuhu Island (originally known as Wii Fit Island in its debut in the 2007 Nintendo game, Wii Fit) is a tropical island where the Wii Sports Resort minigames take place. The island is populated entirely by Miis and various tropical wildlife.

Wuhu Island is the largest and most populated island of the Wuhu Archipelago.

The capital of Wuhu Island is Wuhu Town.

It has also made appearances in other games, such as Wii Fit, Wii Fit Plus, Pilotwings Resort, Mario Kart 7, Mario Kart 8 Deluxe, and Mario Party DS.

Wuhu Island's history before the Miis colonized it is shrouded in mystery; however, based on the sharp contrast between the ruins on the north side of the island, which appear to have been built by a highly advanced civilization, and the huge, crude, half-destroyed monoliths on the southern side, it would appear that there was a battle over the island. It would seem that the less advanced of the two civilizations were a stone-age, tribal-based people.

Their monuments were destroyed very thoroughly, and may have been toppled by the more advanced civilization. The more advanced civilization, which built the "The Mysterious Ruins " on the other side of the island, were incredibly advanced stone masons. A few coins and pots were found in the ruins as well as some interesting spear like weapons that may have been used in battle against the other civilization. Also, scriptures on the wall show that the advanced civilization used to play a sport called zulu which involved a ball but nothing else about the ancient sport was found. The city which they built on the north side of the island was built without mortar, but the stones were so well laid that they didn't need it, and it has stood for thousands of years.

The architecture on the island and nearby Wedge Island is highly unique. The buildings are built mostly of non-native stone. However, there are equally good iron smelters as evidenced by their large structures, the Red Iron Bridge and the Candle . Although the Miis are mainly a peaceful people, they train themselves in the military arts through friendly competition. The islanders have a long history of holding swordplay and archery tournaments, and they are very proud of it.

Today, most of the residents live in the unnamed town on the south side of the island with the exception of a couple residences scattered around the north side of the island. The population is around 400-600 Miis. The island appears to be rather green. Only electric vehicles are allowed on the island. Miis that live there are often called "locals". In total, around 900 Miis live on Wuhu Island.

The most important and visible landmark of the island is its semi-active volcano, Maka Wuhu, set in the center of the island. Near to the Wuhu Town, the most important landmarks are The Candle, a giant lighthouse set on a promontory called Pirate's Eye , the large Evergreen Grove forest, a large bridge called Red Iron Bridge and the Wind Orchard.

There's a even a large beach called Beach Area, divided in different other beaches. Nearby the beach there's a large natural rocky formation called Camel Rock and a large luxurious hotel called Cocoba Hotel. The Island Loop Road is a notable landmark, because it goes all around the island.

The Wuhu Island is divided in various regions:

Wildlife on the island flourishes, despite the fact that the Miis have now lived there for decades. Plant life on the island includes several types of coniferous and deciduous trees, as well as numerous palms. Reeds and lily-pads grow on the lake. The only introduced plant is the "Line grass" which the Miis brought with them.

There are no introduced animal species on the island except for domestic animals such as cats and dogs and sheep. The majority of animals on the island are birds, including seagulls, hawks, eagles, ducks , and owls. There are no "confirmed" reptiles or amphibians known, except for lizards and turtles. The only "known" native mammals are whales and Dolphins that swim in the surrounding waters. Other mammals such as Coyotes (can occasionally be heard howling in the ruins) and possibly deer (being photographed), are also present. A few tropical fish species can be seen in Duckling Lake.

Any vacationer that visit Wuhu Island will have to arrive in a plane, boat, or motorboat like the Sea Caddy. But in Wuhu Island, there aren't airstrips, the only places to land are the designated landing paths surrounded by buoys. There also various blimps and hot air balloons that fly around the skies of the island. Boating, conversely, is very prominent. Private boats can be found all around the island, as well as cruise ships, the most important of which is The Queen Peach, named after Princess Peach.

Appearances in other games

Appearance in the Wii Fit series

In Wii Fit, Wii Fit Plus and Wii Fit U, Wuhu Island is also the main location of the game.

In Wii Fit, the prototype version of the island was called "Wii Fit Island".

The island had a lot of differences compared to the later version:

Some of the major landmarks of the island were missing: the Cocoba Hotel, the Mysterious Ruins, the Summerstone Castle and the Evergreen Grove. Many buildings of Wuhu Town were also missing (Bowling Alley, Broken Clock Tower and Basketball Court), The Queen Peach and the Starboard Harbor are missing too.

In Pilotwings Resort, Wuhu Island is also the main location of the game.

Mario Kart 7 has two tracks where the player drives on the island. The tracks include Wuhu Loop  (Wuhu Island Loop in Europe), which has the drivers race around the entire island, and Maka Wuhu  (Wuhu Mountain Loop in Europe), which has the drivers race around and inside Maka Wuhu, the volcano on the island. A battle stage, Wuhu Town, is also present which allows the drivers to battle all around the town area of the island. However, it is not possible to drive over to the separate tiny village known as New Town. Wuhu Island Loop track takes place in the day, Maka Wuhu takes place in the evening, while Wuhu Town takes place at night. Wuhu Town was remade in Mario Kart 8 Deluxe and took place during the day.

Appearance in Super Smash Bros. for Nintendo 3DS / Wii U 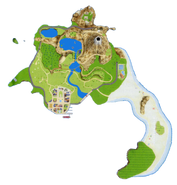 Wuhu Island as seen in Super Smash Bros. for the Wii U/3DS

Another picture from Super Smash Bros. for the Wii U/3DS

Another picture from Super Smash Bros. for the Wii U/3DS

Wuhu Town's Plaza how is seen in Super Smash Bros. for the Wii

The prototype of the Wuhu Island, Wii Fit Island, how it appears in Wii Fit